According to statistics, in every third patient gastroenterologists reveal serious abnormalities in the work of the gastrointestinal tract. If the patient complains of pain in the stomach and anorectal area, loses weight, he has adverse blood tests, the doctor can prescribe a colonoscopy test. About the preparation to it and useful menu before colonoscopy, we will discuss in this article. 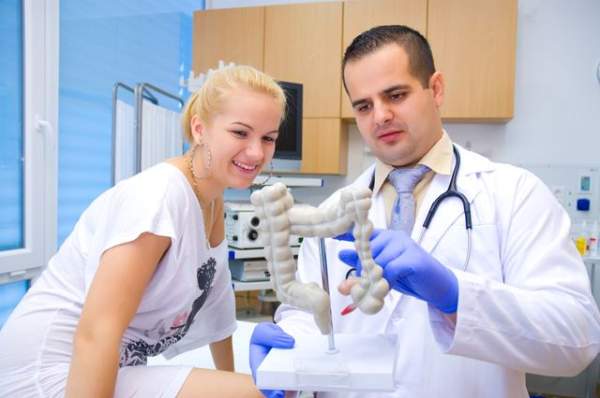 Colonoscopy is a procedure for diagnosing the condition of the large intestine. With its help, it is possible to detect neoplasm or damage to the mucous membrane in time. Sometimes it is carried out to control the restoration of the intestine after surgery or prescribed treatment. To the patient was comfortable, anesthesia, modern sedative, and pain medications are used.

There are two types of colonoscopy:

Diagnosis takes up to 15 minutes. Sometimes there is also a treatment (removal of polyps, taking samples of tissues).

Contraindications to the colonoscopy:

Prepare for three days before the procedure. First of all, cleanse the intestines from stools, which make it difficult to view and pass the probe. This can be done with enemas or laxatives.

The diet before colonoscopy of the intestine is no less important.

Basic principles of the diet:

Nutrition before colonoscopy should be balanced.

The last meal should be no later than 14 hours of the day before the colonoscopy. Later this term is allowed to use sweetened green tea, allowed juices, broth, plain water, mineral water without gas.

You need to follow not only the menu before colonoscopy but also adhere to a special diet after colonoscopy of the intestine.

Menu after colonoscopy should be gentle. To eat it is necessary fractional to exclude excessive loading on a gastrointestinal tract. In the diet should be present easily assimilated products, enriched with vitamins, macro- and microelements. Such nutrition reduces the risk of developing infectious diseases of the intestine, as well as the possibility of bleeding from the lower parts of the digestive tract.

It is important to exclude after the procedure of overeating and eating heavy food, which is long digested.

For 20 hours before the colonoscopy, you can consume only liquid food (broth, tea, water).

Menu before colonoscopy for 3 days

Diet after the colonoscopy for the first time remains. Gradually introduce vegetables and fruits, but restrict the consumption of fatty foods, canned food, sweets, bakery products. Non-dietary products are added by 1-2 per week. Do not overeat, eat 5-6 once a day a little, so as not to overload the digestive organs.

Important! Gentle menu after colonoscopy is important because during the procedure the mucosa of the gastrointestinal tract can be damaged.

Diet with diverticulosis of the intestine and sigmoid colon

The number of patients who complain about digestive system work is increasing every year. The reason is quite clear - the culture of nutrition...

The ABS Diet Food List motivates anyone to concentrate on a large market basket of foodstuff varieties. These food types can be extremely most...

Diet for hepatitis C – menu for the week with recipes

Hepatitis C is a dangerous viral disease that affects the liver and reduces the immune system. Transmitted through the blood: in tattoos and manicure...